I have 784 respondents; twenty respondents were deleted for skipping an excessive number of questions, leaving me with 764 respondents. The respondents were mostly taken from my blog, Thing of Things; therefore, they may not be representative of the general population.

To assess autogynephilia, I used a 22-item scale which is commonly used in the literature on autogynephilia. Unlike in previous studies, I did not alter the language for cisgender respondents. To assess autoandrophilia, I genderswapped the items on the scale. Certain items were easily genderswapped: for example, “fantasies in which I have a vagina/vulva” became “fantasies in which I have a penis”. Others required more of a judgment call, as when I decided that erections and ejaculation are physical male functions analogous to pregnancy. As my autoandrophilia scale has never been validated, the results are unreliable and should be considered preliminary. Further, this scale would not capture any ways that autoandrophilia manifests differently than autogynephilia. (For example, one might expect autogynephiles to be more interested in wearing women’s clothing, as there is more sexy clothing which is only for women than sexy clothing which is only for men.)

To assess sexual orientation, I asked whether a person was attracted to both men and women, men but not women, women but not men, exclusively nonbinary people, or no one at all.

A gender and sexuality breakdown follows. Percentages may not add to 100 due to rounding. 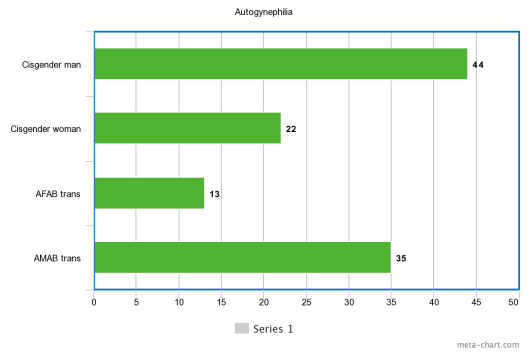 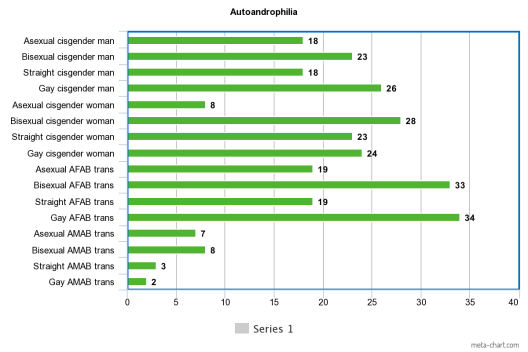 Confusingly, cis men are the group most likely to experience autogynephilia, and cis women are also more likely than average to experience autoandrophilia. However, when broken out into more specific categories, we discover that this is mostly driven by people who identify as neither cisgender nor transgender– that is, the potentially gender dysphoric.

People are much less likely to experience autoandrophilia than autogynephilia. It is unclear why this might be. It is possible that my measure failed to capture autoandrophiliac sexuality; I suggest performing qualitative research on transgender men to construct an appropriate measure. It is also possible that autoandrophilia is legitimately less common than autogynephilia for some reason: for example, perhaps because female bodies are hypersexualized in the media while male bodies are not, or because people with testosterone-dominant systems have kinkier sexual fantasies.

It has been occasionally claimed that trans men do not experience autoandrophilia. My survey suggests that this is false; trans men have a notably higher rate of autoandrophilia than other groups. The alternate construct of “autohomoeroticism” is not supported: autoandrophilia is detected in a survey which does not ask about any specifically homosexual male behaviors, but merely about sexual arousal when imagining having a physically male body and adopting a male social role.

Autogynephiliac fantasies tend to be about having a woman’s body, wearing women’s clothing, or being admired or having sex while a woman. Very few people were interested in more outré forms of sexuality, such as menstruation, urinating while sitting down, sitting in a feminine way, or being seen as a woman by strangers. Trans women are more likely than cis women to be aroused by these unusual fantasies: cis women’s average is typically between 0 and 0.5 on a scale where 0 means not at all arousing, and trans women’s is typically around 1. However, most trans women have no interest in these fantasies; attempts to depict them as typical of trans female sexuality are inaccurate.

Similarly, autoandrophiliac fantasies tend to be about having a man’s body (particularly a penis) or being admired or having sex while a man, and not about adopting a male-typical social role outside of a sexual context.

Bisexual cis women experience a rate of autogynephilia comparable to transgender women’s. I believe this is problematic for claims that no real woman would experience autogynephilia; it implies that either bisexual cis women are not real women or that they are lying about their sexual fantasies in a far less socially desirable direction. It is possible that something unusual about bisexual cis women causes them to fetishize womanhood. It is also possible that autogynephilia is associated with same-gender attraction; certainly, it seems like being attracted to breasts might cause you to be attracted to your own breasts. However, if that is the case, it is unclear why lesbians show such low rates of autogynephilia. My sample size of lesbians was quite small and it is possible this is just noise. I suggest interested people study autogynephilia specifically in a queer cisgender female population.