When I donate money to charity, I try to visualize the effects of my donations.

It’s easy for donating money to not make you very happy. You write a check and you don’t get to see the consequences of your actions. It isn’t as viscerally rewarding as, say, talking to a friend who’s been through a bad time or helping someone move or setting up two people on a date– even though donating money can have a positive effect hundreds of times larger than those actions.

Therefore, when I make a donation, I try to make the consequences of my donation very very salient.

I’ve found several advantages to the practice of visualizing my donations. Most obviously, it increases my sense of life satisfaction and pride in my accomplishments and increases my motivation to donate in the future. However, I’ve also found that it aligns my system 1 better with my system 2 when I’m thinking about my values. “I consider saving a child’s life to be about as good as doubling that child’s income” is very abstract, and my intuition doesn’t have a lot to say about it. If I imagine a parent holding their alive child, and a person who can afford an iron roof and enough food, my intuition has very strong opinions about both of these situations. Through this method, I connect my donations with all parts of my brain, instead of just the ‘explicit verbal thinking’ part.

Some charities are easier than others to visualize. GiveDirectly is particularly easy to visualize, because of GiveDirectly Live. I can scroll through GDLive and take credit for cash transfers up to 83% of the value of my donation (the rest goes to overhead). The life-saving GiveWell charities are also particularly easy to visualize: you can divide your donation by the cost per life saved and get an estimate of how many children you’ve saved.

Life-improving global poverty charities other than GiveDirectly, animal charities, and existential risk charities are harder to visualize. The GiveWell cost-effectiveness spreadsheet suggests that deworming is about ten times as good as GiveDirectly, so if you donate to a deworming charity you can do the GiveDirectly Live thing but multiply your donation by ten.

Animal charities and existential risk charities are more difficult to motivate. I suggest studying what the charity you’re donating to does, coming up with some reasonable thing that your donation is buying, and then following the chain of how it winds up improving the world. For example, a ten thousand dollar donation to the Good Food Institute might pay for an eighth of the salary of a person specializing in outreach to startups, and they identify funding opportunities for cultured meat startups, and that makes it more likely that cultured meat is developed.

I think it’s important, when you visualize, to make sure that a larger donation gets you a more rewarding visualization. People do not in general do this on their own. If your donations save five children’s lives, then you should make a particular effort to imagine five separate children that you saved and give yourself credit for each of them.

I haven’t explored this personally, but I’m interested in thinking about ways to bring the effects of my donations to mind more often. For example, I’ve considered making a collage of the benefits that come from my donations: a picture of a child for each child’s life saved, an iron roof for each GiveDirectly-cash-transfer-equivalent increase in consumption, a chicken for each donation equivalent to a year of veganism, a criminal for each person saved from the US justice system, a star for each appropriate unit decrease in the chance of human extinction, etc. 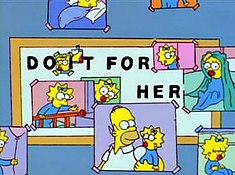 This, except with a bunch of pictures of African children.

Does anyone else have any thoughts on how to make the effects of one’s donations more ‘real’, or other methods to increase warmfuzzies from donations and align warmfuzzies with effectiveness?